I was incredibly disappointed this past weekend in The New York Times. I’m a print subscriber, and I truly value the news reporters and editors there. They do work that is second to none, anywhere in the world, when it comes to digging out and publishing important facts.

But the folks running the editorial/opinion page right now are a whole other story. They seem to lack even the most basic standards of research, most recently evidenced in this editorial that led the Sunday section. It’s about a labor law issue that my fellow freelance journalists and I care deeply about, because it threatens to destroy our careers. The Times Editorial Board blindly supported highly controversial legislation without even seeming to understand that basic fact.

I wrote this rebuttal today for DailyKos, urging readers to understand what this legislation really is. The Times Editorial Board led readers to believe that it’s only about the cost of an Uber ride. The truth is far, far more complicated.

My Message: Becoming Fred Flintstone is Not a Goal

New Jersey’s largest newspaper published this op-ed that I wrote on Jan. 9—the same day that, after two months of intense pushback from freelancers like myself, NJ Senate President Steve Sweeney said he would stop pushing anti-freelancer legislation through the lame-duck session in Trenton.

The legislation is likely to be back, though, in the next legislative session, putting the careers of thriving freelancers like me squarely in the crosshairs. The AFL-CIO is pushing bills like these nationwide, which is why I took the opportunity to speak directly to that organization’s New Jersey leader in this piece.

This op-ed is strongly worded, I know. It needs to be. A lot of thriving careers, including mine, are going to be destroyed if this type of legislation isn’t stopped.

America, Are You Listening? 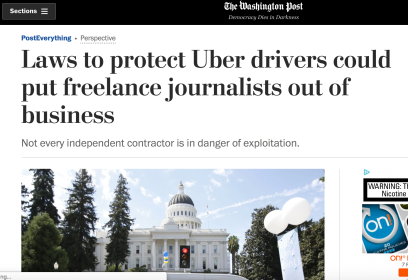 I wrote this op-ed published today by The Washington Post, trying to alert everyone who works as an independent contractor, or whose business hires independent contractors, that what’s going on right now in New Jersey is going to affect employment law for all Americans going forward—for many years to come.

Please, give it a read and share widely. The upshot:

“The independent contractor laws now being written in a handful of states are setting precedents for how the language is going to be written across the country. If we screw this up in New Jersey now, then millions of Americans stand to be screwed over later.”

Today, I had an op-ed published in the Star-Ledger, which is the biggest newspaper in my home state of New Jersey. It explains how legislation that started out in California has now come here, and how it could wipe successful freelance journalists like me out of business altogether.

The crux of the problem is that we need to have a national conversation about the meaning of the term “independent contractor” in the age of the gig economy. Here in New Jersey, lawmakers are trying to solve a problem with improperly classified workers at companies like Uber and Lyft—who should be full-timers, but aren’t—in a way that loops all independent contractors into the chaos.

Independent contractors come in a lot of flavors, including freelance journalists like me, who are not misclassified. We’re independent contractors by choice, we’re successful and we pay our taxes. That’s why I wrote this op-ed, and why I hope that New Jersey’s lawmakers come to understand that they shouldn’t be solving one problem while creating an entirely new one.

And if you think it won’t happen in your state, think again: New York already has a version of this legislation on tap for 2020, and presidential candidate Elizabeth Warren has said she backs these types of laws. This is a New Jersey problem right now, but it’s a federal problem in the long run—and it matters to millions of people like me who earn their livings as independent contractors.